My drawn-out list of Ten Trailers to Keep You Awake has come to a close–until Ten More Trailers to Keep You Awake, of course (think there’s only ten out there)?  I saved the best for last. Seriously, if you’re feeling jumpy and need to wind down to fall asleep because you have to get some rest …well, it might not be good timing to watch this. Perhaps wait till daylight, or when you’ve got work to do and feel yourself nodding off, and you’re out of coffee, would be a more practical time.

This is actively frightening and STRONGLY reminded me of why The Exorcist usually holds the top spot on many, many “Scariest Movies Ever Made” lists, and not just fan lists, but all kinds of print media around the globe. I have yet to see one complaint or someone taking issue with this ranking.

Not that the other nine trailers weren’t scary as hell, but the Exorcist was in the ten-item list for quite some time. I didn’t save it for last as part of some complex thoughtful advance plan; instead, every time I’d think yeah, need to put up the Exorcist trailer and finish the list already, my pulse would speed up. And just fucking forget posting it after dark when I’m the only one in the house still awake. So at 3AM, I got the bright idea to go find the specific version of the trailer I wanted, got the shit scared of out me when running it to ensure I had the right one (and I turned the “mute” on ten seconds in, too), then figured  since it was too late to turn back on the whole racing pulse-causing-insomnia thing, I’d finish what I started.

Before they re-released the movie in theaters in, I believe, 2000-2001, restored and re-mastered. they sold a special edition, which I ended up buying to see the notorious spider-walk scene that was cut. Middle of the day, sun out, hopped on my stair climber for my early workout while I watched (as was my routine at the time). Oh, the special features start with several original trailers? Awesome! Batter up! First thing I see is the below trailer. Huh, the 1973 TV spot, wonder how good th–

Then after my hand stopped shaking enough to work the remote to dial down the volume a little, I get…

Oh, by the way, that reminds me. After it was way too late, I discovered a fun fact: This last trailer above is rare due to the fact that was pulled from theaters out of concern that it would be too frightening for audiences (I fucking agree). Well well!  Isn’t that funny? Oh,  I totally understand; just maybe a little heads-up for those of us watching at home would have been nice, though.

I have a TON of Exorcist content (some of it hard to find online), but I’ll try to keep from taking a sleep-aid by not sharing that in this post. Here’s what someone called an “Exorcist Trailer”, but it turned out to be a (well-crafted) fan-made montage containing 90% of the most horrifying scenes. If you haven’t seen the movie, and plan to, I advise you to skip it, too spoiler-y. If you don’t want to see the, say, the bloody crucifix scene (which still makes me wince every time; I think the Foley artists made it twice as brutal) or a line that sounds like but is not “your mother sews socks that smell”, or are easily offended, REALLY skip it. Now that the spoiler warnings are out of the way,  this should do the trick if you’re still sleepy. This is actively frightening and STRONGLY reminded me of why The Exorcist usually holds the top spot on many, many “Scariest Movies Ever Made” lists, and not just fan lists, but all kinds of print media around the globe. I have yet to see one complaint or someone taking issue with this ranking.

OK! That about does it for me watching anything else related to The Exorcist for tonight! Or any night for about a week after dark! Meanwhile, as a kind of palate-cleanser, here’s the hilarious pre-credits Exorcist parody from Scary Movie 2. Also very, very R-Rated, but it always makes me laugh when I get a little freaked out. Enjoy!

Wonder if James Woods knew the cameras were rolling from between 1.20 and 1.50? Heh. Hope that last clip brightened up your Monday a little! To be continued… 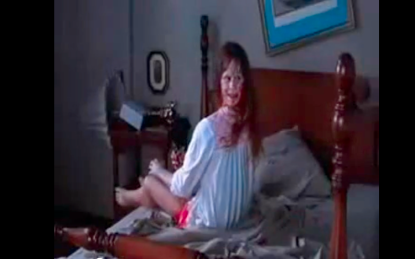 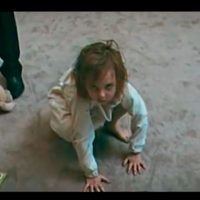