A lone boy was walking home from school later than usual; dusk had just begin to hit. The streets were nearly deserted, so he was surprised to hear a sound behind him. He looked around for the source of the sound, and soon saw a lighted window. A pretty young girl his age was sitting at the window, hugging her elbows, which were propped on the open window sill…

I honestly don’t know which creeps me out more– Teke Teke or the Slit-Mouthed Woman. They both frightened the bejeezus out of me when I first discovered them… on You Tube. A few years ago. When the only internet connection in the house was also in the most dimly lit, coldest room in the house. The desk in the room can only be placed one way,  so my back was always to the door. I may have also mentioned that about this time, the two kittens we’d adopted (who I swear could violate the laws of physics) weren’t allowed in that room because there were too many irreplaceable possessions in there for them to destroy, (no matter where in the room we hid the breakable stuff), so we kept the door closed at all times. This room ALSO had the one door in the house with some kind of frame dysfunction, whereas the kittens discovered if they both hurled themselves against it enthusiastically enough*, the door would crash open so they could enter (more like ‘explode into’) the office!  You can read about my first experience with that here (funny now, NOT funny then).  My point is, imagine watching one of the scariest videos  on You Tube for the first time, sound up, after dark, then adding the door to the room crashing open so hard it bounces off the wall (with no warning whatsoever). Someone might as well have snuck in the room behind me and tossed a lit firecracker under my chair.

Which brings me to Teke Teke (テケテケ). I hadn’t heard of either of the blood-curdling, horrifying Japanese urban legends at the time, and I discovered Slit-Mouth Woman and Teke Teke within the same half hour!** Oh, what a nice ninety minutes or so of sleep in had that night …when I wasn’t having nightmares about being chased around by Slit-Mouth woman or Teke Teke.

If you think the name of the legend, ‘Teke Teke’ sounds too goofy or even too cute to be scary,  join the club …though the club membership only lasts until you get the equivalent of Teke Teke 101 by watching this:

Aaaand I stopped seeing the humor in the name too!

A lone boy was walking home from school later than usual; dusk had just begin to hit. The streets were nearly deserted, so he was surprised to hear a sound behind him. He looked around for the source of the sound, and soon saw a lighted window. A young girl was sitting at the window, hugging her elbows, which were propped on the open window sill.
It was unusual place for a girl his age to show up, as it was an industrial section of town. Still, he couldn’t take his eyes away from her slender silhouette, her long hair blowing in the wind as she rocked gently on her elbows. Nervous but also curious, he slowly walked closer to the window and the girl so he see her face, ask her name.
As he got closer, he thought he saw her give him a slow, inviting smile as she rocked.  It was then that she suddenly leapt out of the window and onto the ground, landing on her hands. He froze as he realized with horror that the lower half of her body, below her ribcage, was missing. The girl’s head lolled on her neck and grinned at him as she balanced on her palms.  She lowered herself down further, onto her elbows. Then she began to rapidly drag herself towards him on her hands.  Since the flesh on her elbows was partially worn away, the bones made a distinct sound on the pavement as she skittered towards him: tek tek… tek tek… tek tek…
Horrified, he moved to run but stumbled backwards and fell; the impact when he hit the ground hard temporarily knocked the wind out of him.  He tried to shuffle back on his hands and push his legs back and away, opened his mouth and inhaled a huge gulp of air. The half-girl paused for a moment.
Before he could scream, however, she sprang onto him and tore him in half at the waist.
After the police arrived at the scene the next morning, they found the boy’s remains, but no trace of the girl. And though they searched for weeks, they never did find the lower half of his body… 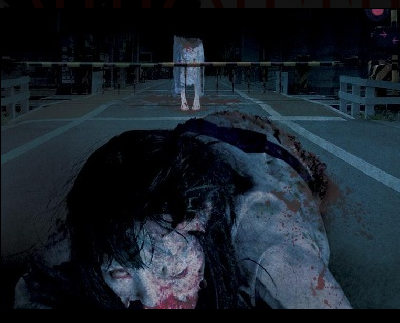 There’s a third re-telling that was made into a J-horror movie (Teke Teke, then the sequel, Teke Teke 2 ). Here’s the official plot synopsis:

Yuko Oshima stars as Kana, a schoolgirl whose normal life is turned upside-down when her best friend is found brutally murdered, having been cut completely in half at the waist. Soon, Kana hears about the urban legend of “Teke Teke,” the ghost of a legless woman who was found dismembered years ago and now haunts the railway station. If you see her, in three days you will be killed. In a race against time, Kana must search for the truth in order to escape the horrific fate that awaits her.

I’ve looked all over the goddamned internet to try to obtain or watch either movie in the series, but so far, no go. I did find a creepy trailer, though…

Plus a trailer for the sequel, which seems to be bloodier. Like, a lot.

If I do track these down, trust me, you’ll be the first to know. If you find the first one, every single review sternly advises that you stay after the end credits, which tie the two movies together.  I’ll also report back if I can locate the manga Hanako and the Terror of Allegory, which apparently cuts to the chase and features victims just being pushed in front of the tracks right off the bat.  The other version I found of the legend takes place in a bathroom stall (if you know much about Asian urban legends, you’ll know bathroom stalls–especially in any kind of school– are not the safest place to be when you’re alone.

In that version, Teke Teke (who again, lost her legs on the train tracks) haunts bathroom stalls and will ask the occupant where her legs are. Answering incorrectly will result in having your legs promptly ripped off. To save yourself you must answer and tell her that her legs are at the Meishin Railway. I don’t know what happens after that, but now you know what to do in the situation.***

*and LOUDLY enough, of course…

**I also discovered “Red Cloak”, and “No Face,” among other horrifying Asian Urban Legends , but let’s spread the sleep-with-the-lights-on posts out a little, huh? Good, I’d rather dial down the nightmares a little bit too.

***Also, if you run into the slit-mouthed woman, I’ve heard you should toss something shiny on the ground–or some candy– and run. Riiiight. Yeah, you know what, I’m not going to Japan any time soon. 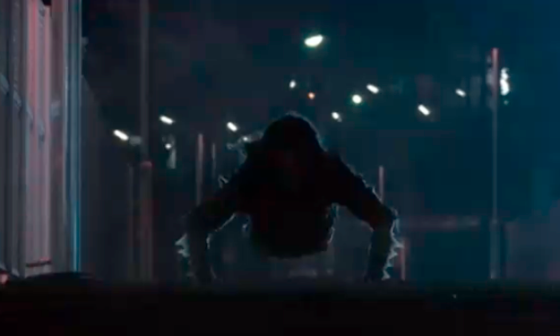 If you see this, well, bad news …you’re fucked.