OK, so it’s Monday and we’re feeling a little low on energy here, but hey, you don’t have to be at the top of your game either before you take our newest poll! We inserted a few of our favorites here in this piece in case you hadn’t seen them yet, or wanted to confirm they still scared the living shit out of you before you voted (and yep, you can pick two runners-up for a total of three picks). Scroll down if you want to skip the preamble and go directly to vote.

See, we post a lot of scary short movies online. Sometimes–like this past weekend– we sit through literally dozens of ’em on the laptop looking for a gem worth posting. We do have a few sure things we’re still saving for a rainy day,  but these days, we’ve already posted most of the scariest made (so far). It seems like whenever we’re combing the net and watching ten or more at a time, it’s always after midnight, which may be why we stopped having “Scariest Short Horror Film of the Week” be a regular feature for a while back there, but that’s beside the point.

What do we look for before deciding to post? A good jump scare–or two–is usually a sure thing, as long as it’s earned and not a cheap, lazy one. “Lights Out” sure has that:

A fridge scare (AKA a chilling and/or horrifying reveal), done well is also a sure bet. Here’s an example of the latter, in the very short, simple, but hair-raisingly effective “Mockingbird” (from Drew Daywalt):

A spooky, especially creepy atmosphere is a big plus, as in Bloody Cut’s “Who’s There?” Film Contest Grand Prize Winner “Play Time” (which isn’t exactly a slow-burn, but you’ll get the idea):

Of course, some really disturbing make-up effects and gore aren’t required (none of the films listed so far really have much blood), and gore for the sake of gore isn’t scary, but here’s an example of it working well in the exorcism shocker “Deus Irae”.

Then you get a film that has all of the above (except the gore) but you don’t really break down intellectually what aspects scare you until after you’ve calmed down from watching it (whenever the hell THAT is), because you’re too busy for anything besides being fucking terrified. If we had to pick just one “Scariest Short Film We’ve Ever Seen,” it’d be the absolute nightmare that is Mama, below.

We know you’ve seen others, so we listed the ones here that got the most positive feedback and left a space for a write-in. Tell us, we’re seriously curious! Here we go.

If you feel like watching a bunch more, go to the “category cloud” on the sidebar and pick “Scariest Short Horror Film of the Week”. “Horror Short Films” will work too.  Here’s a few links to ones we highly recommend if you missed them the first time around: Bloody Cut’s gothic folktale of the “Suckablood,” and their gory masterpiece “Don’t Move” that gives you another reason who you should never even be in the same house as a Ouija Board, let alone play with one. There’s also two other Drew Daywalt films that we watched in the middle of the night and instantly regretted our decision; “Spoon”, starring Christa Campbell showing some acting chops, and “Cleansed,” which we regretted watching after dark less than a minute in. Actually, anything we’ve posted associated with Bloody Cuts UK or The Daywalt Fear Factory could give you nightmares… 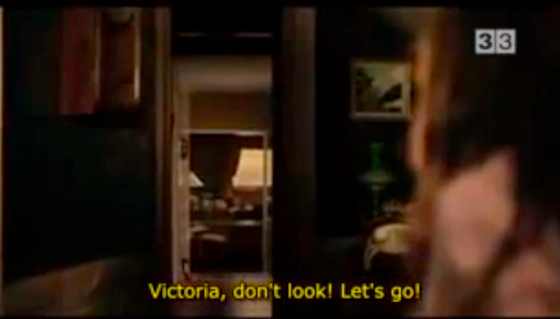 I was considering posting this Argentinian blood-curdling short film as “Scariest Argentinian Short Film of The Month” or “Scariest Exorcism Movie of the Month,” but decided to use it this week so there’s some variation on the ones I post.

Many people who’ve been wowed by the short movie say they didn’t want it to end.  Other common reactions are versions of viewers asking, “what the HELL did I just watch?”

Here’s the official plot description:  A  fragile border separates our world from the realm of darkness, where nightmarish creatures await in the shadows. Only one thing is standing in their way: a secret order of priests, who devote their souls to protect this border. They are the ‘Deus Irae’.

OK, I had no idea how scary and batshit-crazy this short film would be. I was also floored by the writing, the effects… and how it made me want to turn all the lights on and worry about just what might be under my bed —even though it was still light out. This one is definitely worth watching full-screen; the lighting, atmosphere, and stunning cinematography by Lucio Bonelli are off the fucking hook on this 13-minute short!

All I knew about Deus Irae  (from Nerdhaus Films) going in was that it was very, very scary, had a graphic content warning for violence and gore, and was centered around the following plot: a mother and her little girl are preparing for her exorcism, waiting for a team of three expert priests to arrive. I was caught TOTALLY off-guard by the blood-curdling practical effects (courtesy of the sought-after award-winning Rabbid EFX, who utilized a five-member special effects team to create the horrifying sights for the short).  They’re almost a little too memorable –especially when you are having a restless night. The movie had a low budget, but you’d sure as hell never know from watching it.

Below, you’ll find a breakdown of the digital effects sequences (do NOT watch before the short!) from the film’s producer.

Many people who’ve been wowed by the movie say they didn’t want it to end.  The latest word is that a feature film is in the works (you can also read more about that on the film’s official website, right here). Other common reactions are versions of viewers asking “what the HELL did I just watch?” 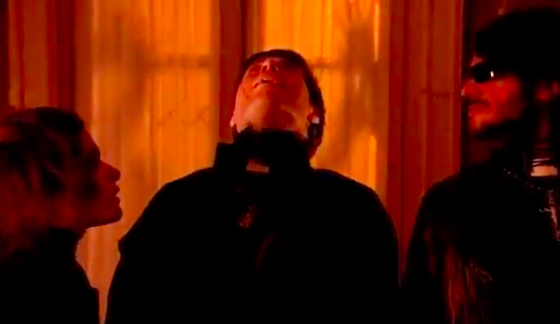 I highly recommend checking out Rabbid Effect’s amazing, awesome website– there’s at least half an hour’s material from various sizzle reels, trailers, galleries, and digital art there, and the presentation is stellar. You also, as I did, may end up jotting the names of several movies they’ve done effects for, just from the demo clips, to look into and hunt down. Hell, I spent over an hour exploring.

Pedro Cristiani wrote and directed this show-stopper of a short, and Lucio Bonelli was the DP and cameraman. If you’d like to know more about Lucio Bonelli’s work, here’s a link to more movies he’s created cinematography for.  Sadly, this is the only film he’s done in the horror genre, but hopefully that will change with the feature-length film!

Unsurprisingly, Deus Irae  made the rounds at the festival circuit– almost every single one, including Fantastic Fest. The film was shown at the Toronto After Dark film festival, where it took home the well-deserved Audience Award. 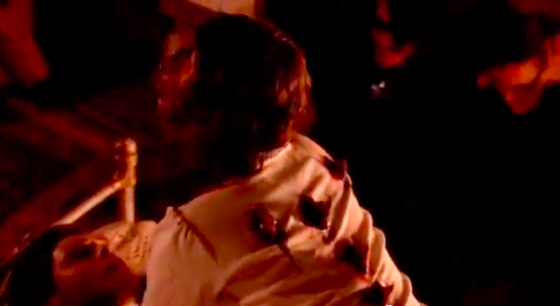 “It doesn’t matter how it happened or what’s the logic behind it: the demons are among us. And the only people with enough knowledge and strength to face them are the Deus Irae, a strange militia of gun-loving priests. But every battle is different. As well as every possession. And every priest. The short film Deus Irae  shines as a particularity work that has a much larger build-up behind, suggesting this horror adventure is the beginning of a project that will surely change the way horror films are made in Argentina.”  You’ll get no argument from me on any of THAT.

Deus Irae  also roughly translates to “The Wrath of God” in Latin, as Wikipedia tells me, anyway.   Perfect.