I was lucky enough to find director David Guy Levy‘s Would You Rather  available today to watch on Amazon (and not for an insanely expensive price, either; more reasonable than the Comcast/Xfinity price). The set-up goes like this:

Desperate to help her ailing brother, a young woman, Iris (Brittany Snow), desperate to help her ailing brother, agrees to compete in a deadly game of “Would You Rather,” hosted by a sadistic aristocrat, Mr. Lambrick (Jeffrey Combs), at his luxurious mansion/estate. Iris –and the other seven ‘players’– have no idea they are in way over their heads until it’s too late to opt out. They all need the money desperately and let that cloud their judgement when agreeing to play, even after hearing the rules and being given a chance to leave. Needless to say, they begin to regret their decisions shortly after the game begins. The very apt tagline, which takes on new meaning once you’ve seen the entire film, is: Tell yourself it’s just a game.

I’m including the Dread Central review because I agree pretty closely with theirs on more or less all their points – though I think any kind of comparisons to Saw  (or the sequels, anyway) aren’t really that accurate.  Click the big red link below to read Dread Central’s great review by The Horror Chick, then Horror Boom’s thoughts on the movie after the link.

Would You Rather (2013)  Horror Movie, DVD, & Book Reviews, News, Interviews at Dread Central.

The film takes the first half hour to set up the situation, the characters, the setting, and finally the actual rules of the “Would You Rather” game. None of this is remotely boring; screenwriter Steffen Schlachtenhaufen knows exactly the right amount of time to spend to interest and hook the audience, taking a slow-burn approach (if you could call this movie a slow burn… I guess it depends on your definition of a slow burn, I’ve found it to be a subjective term for viewers). We’re in the dark more or less the same amount of the characters–we discover the rules of ‘would you rather’ and how horrible or painful the choices are going to be right along with the characters, with information being doled out to the poor “guests” at the same time it is to us.*

Towards the end of the first third of the film, things start getting tense and uncomfortable as the guests eat a gourmet dinner served to them, but nothing gets too ugly until after dinner, when the game actually starts. All eight guests get one chance to leave after the rules are explained– Comb’s character reminds them of the game they might have played as kids- but no-one acts on it then, of course. This time the host asks the questions, taking turns, and for the first round they only have 15 seconds to make the decision.  During the first round, two characters at a time have a leather strap which is hooked to a machine. When a button is pressed by the guest who has been asked would you rather, they have the choice to shock themselves or the other person depending on what button they press. While not gory, it’s fairly tense as they only have fifteen seconds to decide before being “eliminated.”  Oh, and by “eliminated”, Lambrick means “executed by gunshot”.

We get to know and care about the characters more (or which ones we start to hope will end up having to do something horrible to themselves–I spent most of the last half of the movie rooting for Sasha Grey‘s mean-spirited, how shall I describe her, See-You-And-Tea of a character to get the worst death in the movie). Speaking of the actors,  I had no problems with any of the cast, and it took me till over halfway in to recognize Ricky, better known as one of the Trailer Park Boys (well, the actor, Rob Wells, that played him, I realize Ricky is a fictional character), and I’m a fan of the Canadian comedy group. That’s how much range he has. I’ll also admit that I usually kind of sigh in a resigned way when I find out Sasha Grey is going to appear in a show or movie that I plan on seeing, but when she’s in a mainstream movie,  and not playing herself, I found I have no problem with her, at least in this movie (sorry guys, she keeps her clothes on). I didn’t even identify her as the actress playing the character until the credits rolled.** The only name in the cast I saw before watching the movie was Jeffrey Combs (and Brittany Snow, who I have a neutral enough opinion of that I didn’t think about one way or the other, or have it influence my decision to see the movie).  I didn’t even know Sasha Grey played the character until the credits ran, though I did recognize John Heard within a couple minutes after his character appeared.

I also applaud the film-makers for not turning the movie into torture-porn, which they could have very easily slipped into. I do think any kind of comparisons to Saw  (or the sequels, anyway) aren’t really that accurate. Certain moments did make me wince, but for the few really nasty challenges (especially two towards the end) the camera turns away during the actual (fairly quick) gruesome act; the most we see is some aftermath. I wouldn’t call the movie tame, but the poster being used below really doesn’t accurately represent the tone or subject matter of this horror movie:

During the violent moments of Would You Rather,  I mainly winced in sympathy for the poor characters, especially the ones who had some compassion for their fellow contestants and opted to injure themself—or volunteer themselves if another participant was torn between who to inflict pain on. I’ve seen things much more gory (especially just for pure shock value) in any of the Saw movies. I’m not one of those horror fans who slams them as trash, in fact I own one of them. I’m not saying they don’t  linger on torture (which I feel started with Saw 3 and progressed, as the franchise went on, to more and more emphasis on the gore and topping themselves on how gruesome and shocking the traps/“kills” were), but I’m not above them, and I didn’t watch them for the believability, but for the Grand Guignol aspect. I’m not super-proud of it, but I’m also no hypocrite.  My point, however, is that Would You Rather  isn’t this kind of movie. I was rather surprised—but not at all dissapointed— that the level of gore in the movie was as low as it was for what sounds like a torture-porn set-up, but I’d say on a scale of one to ten, it was a six. I appreciated the way that, in the two gruesome moments I mentioned before—the camera flinched away at the same time a certain horrified character in the room did.  They didn’t want to look, we didn’t want to look.

I had a couple minor complaints, but they were minor enough that I had to re-watch the movie to remind myself what they actually were. There was a snotty young male character that not only didn’t really get what he deserved at all, but didn’t really seem that necessary to the plot, but don’t let that stop you. Even after I read the glowing review on DreadCentral.com, I was surprised by how much I enjoyed the movie.

If you can appreciate a good indie horror movie with great production values (IFC Midnight picked this one up; if you have trouble tracking it down on demand, that’s the category I found it under), you can’t go wrong. You really can’t go wrong if you’re a fan of  Jeffrey Combs–his character “runs the show” in the story, but his acting is what makes the movie work– great as the other acting is, his was the role that, if cast wrong, could have actually ruined the movie or made it tedious instead of riveting. I can think of several genre actors, who I’ll be polite and not name, that could have sunk the movie instead of elevate it. Since he’s the one who organizes and relishes the ‘game’ (though he has security/enforcers on staff to do the dirty work, he just watches), we’re probably supposed to at least dislike him, but he was too entertaining.

Also, for what it’s worth, the poster art below is not only superior but much more fitting to represent Would You Rather: 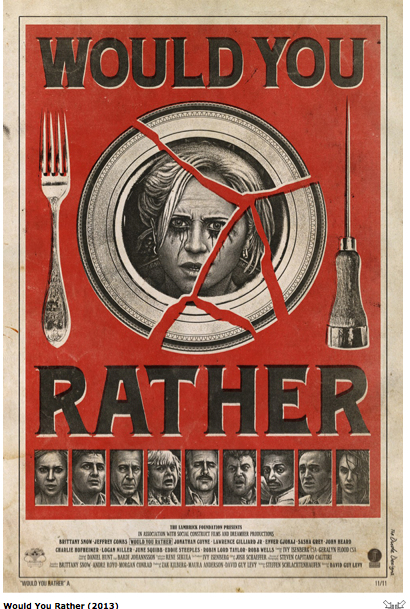 Hopefully this one will get used instead of the torture-porn-y eyeball image. Enjoy the movie! Check out the first Dread Central piece under the “Related Articles” at the bottom- it’s a wonderful interview about how the movie got made, the casting process (in the piece, Levy says the second he saw Jeffrey Comb’s reel, he knew he was the perfect actor for the lead; when he sent Combs the script, he returned it a day later, along with not just an acceptance note, but a thank you note;  a class act all the way).

*OK, obviously they haven’t seen the trailer and read the synopsis or seen press kits, but you get the idea, and after the game officially begins, all bets are off.

**I actually thought there was a good chance it was the actress who played Dawn, Tig’s white-trash daughter on “Sons of Anarchy”.