Unless you’re as obsessed with The Conjuring as we are, we’re guessing there’s going to be at least a few of these that are news to you. Either way, these (and the links we give for more information) make for some interesting– and creepy– reading! 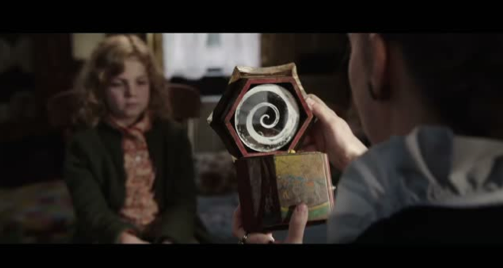 1. Lorraine Warren herself has a very brief cameo in The Conjuring – in one of the classroom scenes. You’ll need to keep an eye out to catch her, though.

2. We’re not going to go into back story (here, anyway) but when we poked around online to try to find out more about the real case, we discovered that the main demon, the one that terrorized the Perron family the most (especially Lili Taylor‘s character) and wanted to cause them the most pain, was called “Bathsheba”.

3. Remember the ‘Lipstick-Faced Demon’ from James Wan‘s Insidious (2011) who scared the shit out of everybody (especially Barbara Hershey when we first saw him peeking out behind Wilson’s character)?

That actor’s name is Joseph Bishara, and he plays Bathsheba in The Conjuring. Uh-oh.

4.  You may have–OK, probably have– noticed via the film’s marketing campaign that there’s a doll in the movie so goddamned creepy that it makes the clown doll in Poltergeist look cuddly.  The doll is based on another actual case the Warrens investigated.

Creepy-ass doll created for The Conjuring

5.  The aforementioned creepy-ass doll that Wan based this sub-plot on was a Raggedy Anne doll named ‘Annabelle the doll’.  James Wan decided rather than use a Raggedy Anne (Quote from Wan: I could not go to the company that makes Raggedy Anne and say, “Hey, can we portray your doll,  you know, the product that you make as this thing that is a conduit to demonic spirits?”) he’d carefully design, craft, and build the creepiest doll he could find. Mission fucking accomplished. (See: Dead Silence if you doubt how sleep-with-the-lights-on scary Wan can make dolls and puppets)  The Warren Occult Museum displays the original Annabelle doll (in a glass case— for the protection of visitors, not the doll), and you can read about the actual case here… especially if you’re feeling sleepy but need to stay awake.

6. Only one actual prop from the actual Warren’s Occult Museum  (the museum was recreated by the production for scenes in the film), was used during filming. Ed Warren was an avid artist and painter,  and James Wan says he saw one in the museum that “fit perfectly into our movie version of their haunted museum, and that’s what we have in there”. (Latino-review.com)

7. The movie’s original title was “The Warren Files” – possibly because the studio was considering a franchise (we like The Conjuring better). This recent featurette uses the title. In fact, the featurette was included in this piece reporting the news that a sequel was already in the works, despite the fact the movie is several days away from opening at the time (not that we’re complaining, mind you, especially if James Wan directs again).

8. Andrea Perron (who was about 12 years old when shit got real in their new home)wrote a book about her family’s experience called House of Darkness, House of Light. You can see her reading an excerpt from in below. Also, she has her own You Tube channel.

9. During filming,  star Lili Taylor (who also underwent a number of make-up preparations to represent her worsening stages of possession) actually blew her voice out from screaming so loudly and repeatedly… more than once. We assume she (and the sound editors) had a lot of work to get done in ADR.  (source: Collider.com article here) 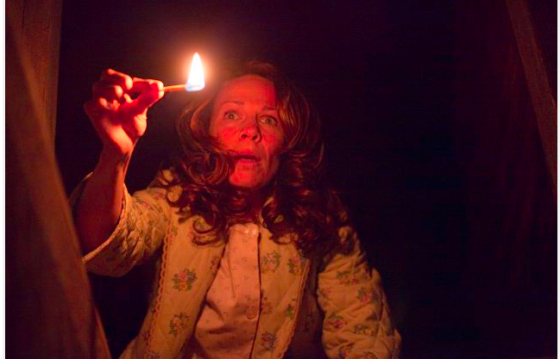 10. Cast and crew reported, when asked in interviews, that they experienced strange events during filming, such as scratches appearing on Farmiga’s computer after signing on for the film (see below quote), people inexplicably waking up between 3 and 4 AM (“the devil’s hour’)  and the real-life Carolyn Perron falling and breaking her hip while her family was visiting the set. (collider.com, same piece)

“We’d sent her the script back in December and she’s in New York. James [Wan] is in L.A. So she read it immediately. We got the call from her reps, who said she loved it and wanted to get on the phone with James, or Skype the next day. … She went to sleep. She came back in the morning to get on her computer to Skype him and there were three deep scratches on her computer screen. Completely inexplicable. Like, they weren’t there the night before when she read the screenplay on the computer, but they were there in the morning. And there was just no way to explain what it was but stuff like that has happened constantly.”   –Producer Peter Safran