“On the set of ‘American Horror Story.’ I promise you will be thoroughly fucking satisfied.” Gratuitous shorts of Dylan McDermott shirtless because, well, why not? The guy said he had to get a personal trainer, he’s pushing 50 and had to work harder for it, so everyone wins by showing it off here.

Now THAT’S all we needed to hear!

Click on the below link to read the piece from International Digital Times:

I really dig this image from the preview for “I Am Anne Frank Part Two.” Enter the lab…

Charles Montgomery: She seemed so sad. I’ve decided to give her a smile that will last forever…

Many of the show’s greatest lines came from Jessica Lange, Denis O’Hare, Evan Peters and Zach Quinto’s characters on American Horror Story (Season One, AKA “The Murder House“). I tried finding a more diverse sampling, but if you’ve seen the show, you’ll understand. I also left a few out that were major spoilers. I purposely called this piece “25 OF the best, most twisted quotes”, rather than “THE 25 best, most twisted quotes”, because all twelve episodes contained at least five kick-ass, twisted lines. The majority of them had ten or more. It’d be a two or three (long) days of work to get them all, and probably an equal number of days to decide the top ten best. So instead, here’s a sampling of some of the best! 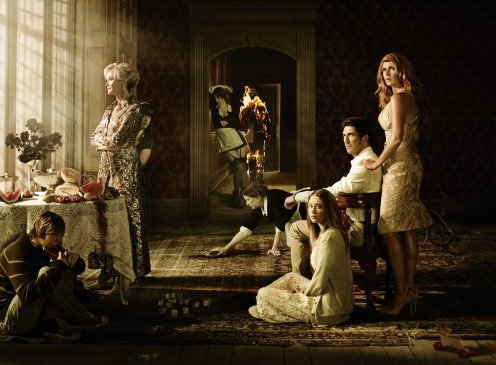 There’s also several (you’ll know them when you see them) that were so nasty and/or profanity-filled, I was shocked that FX let them stay in the episode. During the pilot episode, a character used the word ‘c*cksucker’ three times in one line of dialogue  (without the asterisk), to describe HIS MOTHER  — and made it clear he meant it literally, not just as a profanity (I couldn’t find the exact line anywhere at the time of writing, or it would have been on the list). I wonder now if that was something the writers tossed in there to either see how much they could get away with, or to distract them from something they were really worried might get cut, so they could agree to remove c*cksucker (which I swear to God, I didn’t even hear them ever get away with on VERY gritty shows also on FX  like The Shield or on Sons of Anarchy (yet, anyway). Apparently Ryan Murphy was pretty surprised too, saying they hadn’t gotten a single ‘note’ from FX. Actually, considering what they got away with on Murphy’s previous show, the non-supernatural but equally twisted Nip/Tuck (there’s an article coming on that —advertisers actually pulled out after a couple of  really nasty, gruesome scenes in the last two seasons, after the show sadly jumped its tracks), it’s not THAT shocking. I suppose it’s a matter of perspective, not being easily offended —and a fun, sick sense of humor.

Doesn’t mean I don’t find several of these quotes–especially all the ones involving Elizabeth Short, AKA the Black Dahlia –deeply frightening. Then again, that case always scared the shit out of me, since the day I leafed through a bookstore copy of Hollywood Babylon  in the early 80s and saw photos of the crime scene –when I was WAY too young. I have no such excuse for reading Elroy’s blood-curdling, sickening, shocking novel The Black Dahlia back in the mid-90s, though parts of it actually made me physically sick (no-one who recommended the novel warned me about the Mexico scenes, among other sickening, disturbing details) also based on and around the crime. Too late!

Adelaide: You’re going to die in there.
Troy: Shut your mouth or we’re gonna kick your ass!
Bryan: We got bats.
(They almost immediately get their throats ripped open and die in there)

Patrick: Maybe you should have taken a few minutes to get to know me before you shoved a fireplace poker up my ass.

Larry Harvey: I’m trying very hard not to judge you.
Ben  Me?  You murdered your entire family!
Larry : Yes, but I was never unfaithful.

Chad: Put your skanky claw on that crib, you’ll be pulling back a bloody stump.

Constance: (gives Moira silverware] Do me a favor and polish this up before I take it, won’t you? It’s cruddy with corrosion, and do you know why? Because you are a  shitty maid.

Tate:  I prepare for the noble war. I’m calm; I know the secret. I know what’s coming, and I know no one can stop me, including myself. I kill people I like. Some of them beg for their life. I don’t feel sad. I don’t feel anything. It’s a filthy world we live in. It’s a filthy goddamn helpless world, and honestly, I feel like I am helping to take them away from the shit and the piss and the vomit that run through the street. I am helping to take them somewhere clean and kind. The world is a filthy place; It’s a filthy goddamn horror show. There’s so much pain, you know? There’s so much… There is something about all that blood; I drown in it. The Indians believed that blood holds all the bad spirits, and once a month in ceremonies they would cut themselves to let the spirits go free. Now, there is something smart about that, very smart. I like that.  (beat)  You think I’m crazy?

Larry Harvey: Gimme my treat! You don’t want the trick!

Violet Harmon: And the worst thing is my mom had like this brutal miscarriage a year earlier. We had to have this macabre funeral. Have you ever seen a baby coffin before?

Hayden: You know what I could go for? A nice, big, fat, juicy… [gets hit directly in the face with a shovel)

Travis: (to Larry): Maybe you could snag me some news clippings? Just… little articles about me? I’m thinking about starting a scrapbook.

Constance: And soon after came the mongoloid, and of course, I couldn’t work after that…

Elizabeth Short: That’s how they found me – naked, on display for the whole world to see.
Hayden: You were the front page news of every paper for two months.
Elizabeth Short: I really did become somebody…

Violet: You got any Ramones? Like ‘Animal Boy‘ or’ Too Tough to Die’?

Constance Langdon: Now, who wants to say grace?
Tate: Thank you for the salty pig meat we are about to eat, along with the rest of the rest of the indigestible swill. And thank you for our new charade of a family. My father ran away when I was only six, and if I had known any better I would have joined him. And, also because she’s been trying to get back into this house ever since she lost it, Lord, a big thank you for blinding the asshole that’s doing my mother so he can’t see what everybody knows: that she doesn’t really love him.
Adelaide: Amen!

Billie: Her husband murdered her with an ice pick.
Constance: It’s hard to keep good help.

Constance: From blood and pain come perfection.
Hadley: Hey, bitches. Did you get all that slime off my baby yet?

Tour Guide: The Montgomery murder-suicide was only the first of many to occur behind these bloody walls.
Marcy: Let’s not put that on the listing.

Constance: I also remember, every time I see that ghostly eye, that I was – and continue to be – a hell of a shot.

Vivien : If you are about to diagnose me with Post-traumatic Shock Syndrome, I’m going to bash your goddamn face in!

Violet (to her father, Ben): How is it that a big fancy shrink hasn’t noticed that his wife has totally lost her shit? You’re a cheater: Young girls, old ladies with feather dusters! You’re so weird and pathetic I’m surprised you’re not after me!

Moira: Haven’t you read “The Yellow Wallpaper” by Charlotte Perkins Gilman?
Vivien: No.
Moira: Her husband, a doctor, locks her away in the upstairs bedroom to recuperate from a slight hysterical tendency. Staring at the yellow wallpaper day after day, she begins to hallucinate that there are women trapped in the pattern… Half mad, she scrapes off the wallpaper to set the women free. When her husband finally unlocks the door he finds her circling the room, touching the wallpaper, whispering “I finally got out of here.”

Moira: I’ll get the shovel, you get the bleach.

For some reason, that last line by Moira holds sentimental value for me. Maybe it’s because I was already more or less blown away by the show, but that line, from Frances Conroy’s character, delivered as calmly  as Ruth Fisher announcing to Nate Jr. and David what she had decided to cook for dinner that night when they asked, was the moment I knew I’d basically become American Horror Story’s rabid, devoted fan. Oh American Horror Story,  you had me at I‘ll get the shovel, you get the bleach.  Let’s be bestest friends for the rest of the series, AHS!  I may just get organized enough to review each week’s episode next season, but I’m not promising (anything could happen between now and then). I promise to TRY, though. Lots more coverage is coming and will continue, for Season One and  the season advertised below! Less than ten days away at the time of this writing, woooo-hooo!

Counting down the days till the Season Two premiere, how about you?