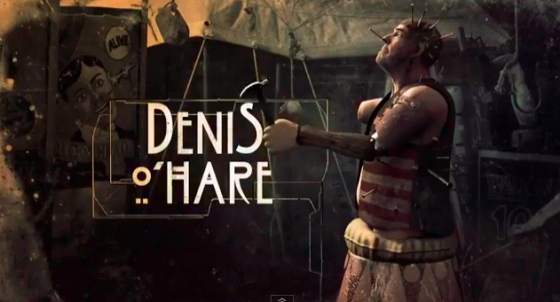 Okay, so Ryan Murphy has said that S4 of American Horror Story will have a “very different look.” We couldn’t really see a difference in the PR photos or the long trailer that debuted Tuesday night (more on that later, we are seriously having trouble keeping up with the new promos/media) on Sons Of Anarchy.

You can sure as hell see it here. Nothing is really hinted at as in the first three (we liked all three, and consider the Coven title credits to end up being scarier than the season itself). We have stop-motion animation (or CGI set up to look like stop-motion)!  Everything is bright and colorful and sometimes in-your-face.. So far only tiny snippets–fast ones– of the opening credits of Murder House and Asylum were in color, and it looked washed out. Coven was all black and white. OK, watch the credits to Freak Show in HD right here, and then we’ll point out a few things. If you are scared of clowns, AVOID LIKE THE PLAGUE (then again, I doubt anyone with a clown phobia will have anything to do with this season).

These may be a slightly extended version of the credits, since it runs about a minute long (also unlike other seasons). 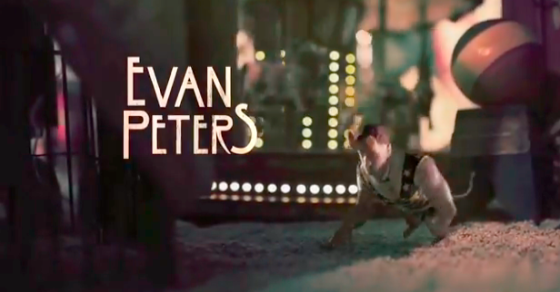 So plenty of evil clown imagery, including Twisty the Clown making balloon animals and then stabbing them with a giant butcher’s knife. A guy with a third leg (with a SHOE on it) instead of genitalia. Stuff that looks like they borrowed it from the more horrifying sections of the Mutter Museum. Plenty of two-headed creatures (including clowns). Did you catch the conjoined twins touching themselves? In the second shot they’re doing it through their skirt, but it’s still not especially subtle.

We’re going to pick this up later, because after watching The ABCs of Death 2 we already have a ton of nightmare material in our brains waiting to pounce on us the second we hit dreamland. Until the, let your Freak Flag fly!