“My rewritten lyrics to Buffalo Springfield’s “For What It’s Worth” should have been the theme song for Barricade, easily one of my least favorite horror movie experiences of the past year. A tedious and muddled mess boasting an ending so lame it made me reconsider how hard I was on The Devil Inside.”

So, Mrs. Horror Boom has been having a rough month (as you can see from the almost bare-minimum amount of posts/pieces the last few weeks)*  and watching as much as possible when she can for the entertainment and escapism value. Today I saw The Day (2012), which I was expecting to be about a 5/10 tops, with what I’d heard was a couple unexpected turns and some good acting from Ashley Bell (AKA, the actress whose amazing acting performance was the best thing in The Last Exorcism and the… OK, the only redeeming quality of The Last Exorcism 2). I admit, also heard there was at least one giant-sized, “HOAH!“** contained.

I’ll elaborate with my review later, but I was pleasantly (if you can describe a bleak post-apocalyptic horror/thriller movie with that adverb) surprised. Ashley Bell’s acting was nothing short of amazing (she may well have stolen the movie) and even though she plays a very stoic, tough woman who doesn’t speak one word more than she needs to,  and makes some possibly questionable choices to survive, I was rooting for her to survive the movie.  When I was briefly skimming some reviews before putting it in my Netflix DVD queue, I happened across a spoiler that some inconsiderate bastard didn’t feel it was worth the extra three-second hassle it would have taken them to put a spoiler warning in front of, even though it happens at the climax of the movie. Fortunately,  they mixed up the characters in question, so it was still a jaw-dropper… and a pretty fucking awesome one. 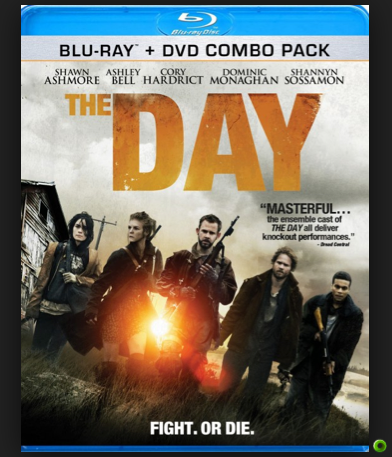 This is the well-reviewed movie, not to be confused with the terrible “Barricade”.

I’d give The Day 7/10, only taking it down from an 8/10 because it was one of those bleak/dark movies the film-makers decide to bleach nearly all the color out of (à la 30 Days of Night, I’m too tired right now to look up the technical name of the process) expect for one flashback scene and adding some slight color to a couple other scenes, which isn’t a favorite choice of mine. Though in the filmmaker’s defense, I’m pretty sure in this case it was no avoid an NC-17 rating, because it is a violent, bloody movie, most of the gore coming from two or more humans trying to kill (and in one nasty case, torture) one another to survive. None of it is exploitational or really unnecessary, it fits in the plot and is earned, rather than just gore for the sake of gore. Don’t get me wrong, I’d be lying if I said I didn’t love Grand Guignol, as long as there’s some sense of showmanship about it, done right.

OK, I’ll save a longer review for later, but I do recommend The Day, especially if you like the survivalist genre, realistically tough chicks, and a clever script where the choices characters make are ones you could see yourself making. ANYWAY! The DVD rental showed a decent-looking preview for the movie Barricade, and it actually looked like a potential decent rental with a couple creepy moments in the preview. Not a lot of plot background, but that doesn’t mean it’s a bad movie. Turns out in this case, it does!

“Detailed” plot synopsis from the IMDB, which doesn’t exactly set you on fire to see the thing in the first place:

This movie is about the Shade family, a year after the death of the mother/wife Leah, the husband and father (Eric McCormack) and his two children go to a cabin retreat in the mountains. While there they are tormented by visions and happenings that start to scare them. But are these incidents real or in their minds? The father feels compelled to barricade them in the cabin in order to keep them safe. But will it work out?

No, no it probably won’t work out, for them or the audience. Oh, and the Parent’s Guide (contributed to by one of those individuals that lists a man not wearing a shirt or a woman wearing a bikini, under “sex/nudity” …sigh)  lists the following under ‘Violence/Gore’:

A younger man rough-houses an elderly man. There are sounds of someone in pain being heard frequently throughout the residence.

Oh, I don’t know if even us jaded horror buffs have the stomach to experience that!  Inside (2007) and Hatchet 2 (2010) were one thing, but rough-housing is where I have to draw the line! Anyway, I had a dim memory that I may have been strongly warned against it, but since I could have confused it with a similarly-titled movie, I headed to trusty Dread Central (after seeing a 4.3 average on the IMDB) and discovered this hilarious review. Check it out below if you want a good laugh! 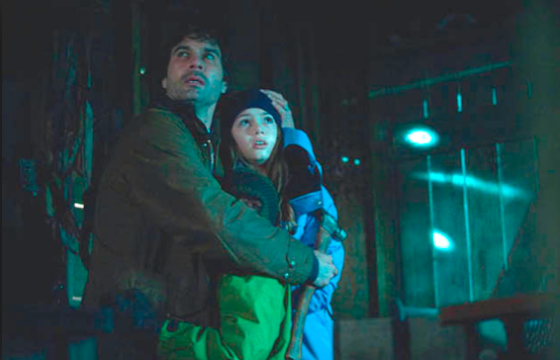 *Sorry for the skimpy content, an old friend had a very sudden, serious medical crisis last month and passed this week. Hard to focus much on anything and all of us at Horror Boom appreciate your patience – and thanks to those of you who sent kinds words.

**We’ve also heard this described as a “Holy Fucking Shit Moment” (or HFS moment, depending how easily offended the person you’re discussing it with is) Moment. Once we figured out how to spell it phonetically to exactly reproduce it, though, we like to use it a lot more. Example- audience reaction to a bus/car/truck coming speeding into frame out of nowhere suddenly and mowing down a character, often when they have just finished (or are even in the middle of) a sentence, sometimes causing them to more or less explode on impact. “HOAH!”

One thought on “Barricade (2012) Gets A Dreaded One Stabby-Knife (Out of Five) Rating From Dread Central – Read Their Hilarious Review Here!”