“Her name is Grace.” -Madeline

Yes, Grace  (2006) is indeed the short film written and directed by Paul Solet  that the 2009 feature film of the same name is based on.  If you’ve seen the 90-minute version, I’m sure you know the plot. Here’s how I would describe it (since the official synopsis is too spoiler-ish): A young woman, Madeline, who is in her third trimester of pregnancy, and her husband have a very bad car wreck, mainly caused by him driving like an asshole. He is killed and she is able to crawl from the wreck, but sadly the baby does not survive. Madeline makes the difficult decision to carry the deceased baby to term. That’s enough horror for at least two feature-length movies already …but, believe it or not, things are about to go downhill and become far more frightening and disturbing from there.

The best working link for the six-minute short horror film I could find was on Fearnet.com (see below).  BUT!  Do NOT read the description, don’t look, just start watching, since the description spoils every plot element from start to finish. Repeat (because I hate spoilers and when people just relate the plot from start to finish in a description before you even watch something), unless you’ve seen Grace  already (the short film OR the 2009 feature), just hit the play button and go full screen. Oh, and do not watch while eating …or if you’re breast-feeding. Even if you’re not, trust me my fellow horror fan chicks, you’ll be crossing your arms across your chest like I was!

I highly recommend you do NOT watch this film if you’re pregnant unless you never get scared or upset by anything you watch in a movie, ever (though the French horror film  À l’intérieur  (AKA Inside,  2007) makes Grace  look like The Brady Bunch, and I’d never suggest Inside  to someone with even a pregnant relative, let alone even begin to explain the plot points to anyone who is pregnant).  Grace  also doesn’t take an especially low-key approach when it comes to gore, either, so back out now if you’re easily upset, or offended. I’m pretty jaded, but even ol’ Mrs. Horror Boom here winced several times.  Intense, brutal, and frightening, Grace  could very well sign you up for a nightmare… don’t say I didn’t warn you!

Click here to watch our scariest short horror film of the week,  Grace, on Fearnet.com.


Grace  stars Liza Weil, Brian Austin Green, and Susan Foley (the feature-length film starred Cabin Fever ‘s leading lady Jordan Ladd as Madeline).  Oh, and the end titles just credit baby Grace as played by “herself”. Though it’d be way creepier if they listed a name, now that I think of it. 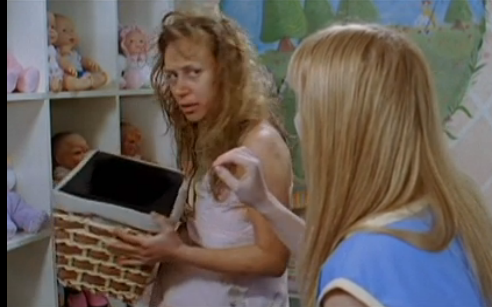 If you want to go behind the scenes, the below version has a really cool commentary. There’s also a short about the make-up effects used; drop me a line or a comment below if you’d like me to add it to this post.

I don’t know if enjoy!  is the right phrase to sign off on Grace  with, so I’ll go with George Romero‘s traditional sign-off: stay scared!

Do you know how beautiful you are?   -Madeline, to her daughter

As the moon climbs high o’er the dead oak tree,
Spooks arrive for the midnight spree.
Creepy creeps with eerie eyes,
Start to shriek and harmonize.
Grim grinning ghosts come out to socialize!

I can’t believe this FIRST aired in 2003 (according to this great Disney Wikia);  it looks so old-school –AND SO COOL! “House Ghosts” was the 50th episode of House of Mouse, originally aired on Toon Disney‘s New For You! Show on October 10, 2003. Plot: It’s Halloween, and Pete unleashes some grim grinning ghosts onto the club to try to scare everyone away. This is definitely the highlight of the episode! OK, I haven’t seen the entire epiode, just this, but I find it hard to believe anything could top this show-stopper. Oh, and I forgot all about the Disney character “Pete” until I saw this. Among others, look for an appearance from Constance, AKA the Ghost Bride, who resides in the attic section of the Haunted Mansion ride at Disneyland. She had a fun back story; a “black widow” who had chopped off, I think, her last six husband’s heads! 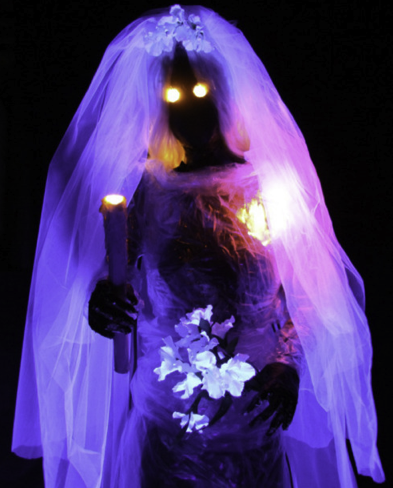 I don’t know who did the vocals used on this re-recording of the “Grim Grinning Ghosts” song (© Original music by Buddy Baker and lyrics by F. Xavier Atencio), but it’s one swinging wake. Expect more special Halloween treats to pop up here soon.I’ve got five of them, and will post the final one on Halloween. I’ll toss in as many extras as I can along the treat countdown, too; we horror fans know that Halloween is the real  “most wonderful time of the year”  Enjoy!

Maybe this is a tribute to the rare “Hatbox Ghost” from the attic. The mid-60s-looking Herman’s Hermits/Brian Jones shag hairstyle threw me off. 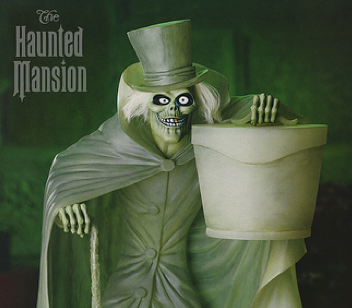 Yep, I think that’s him. Either way, both these guys are beyond cool-looking!

OK, I actually stumbled on the whole 8-minute “House Ghosts” episode, and it had so many great references, including appearances by   Hades (and his demo reel), the Devil in Night on Bald Mountain, and …more than I can count. Worth watching just to see the cameo by Mr. T alone! Nope, I am not making that up. Check it out  below!