“Sleaziest clown working the circuit”… “that Big Top in the Sky”… “black magic clown cult”?  Hey, I can’t see that calender too good.  Does that say Christmas morning over there?

Holy shit, this looks awesome! I was already psyched up about it when I re-blogged a great piece on this, and it sounded pretty fun even with no trailer. It just got better!  OK, let’s get to the impressive, gory UK Red Band trailer for horror/comedy out of Ireland, Stitches,  starring Ross Noble, below:

If I wasn’t sold before (oh, I was  sold, but figured I could wait patiently for it until Scarecrow Video got a PAL copy in to rent) I am now. As soon as I publish this I’m rifling frantically through the internet to try to find a US release date. I would in fact go out of my way to see it– I’d wait in line in the rain to buy tickets for a midnight showing at a film festival within driving distance. I’d maybe even lose sleep to see it, and since I hit thirty-five, I have to be REALLY committed to drag myself out of bed if I haven’t gotten at least six hours of sleep.*

Love that shot (above) of what appears to be Stitches rising from the dead in a graveyard in a flurry of playing cards.  The entertainingly-written basics about the movie, again (they had me at “the sleaziest clown working the children’s party circuit in Ireland”):

Jaded Richard Grindle (Ross Noble) is the sleaziest clown working the children’s party circuit in Ireland. Arriving late to one birthday, his timing is off, the bratty kids a nightmare and a prank goes horribly wrong – he falls on a kitchen knife and goes to that Big Top in the sky.
Years later the same nasty kids attend another more grown up bash. Little do they know, thanks to a black magic clown cult, Stitches will be the uninvited guest of honour seeking revenge on those responsible for his untimely death. Laughs and gore combine in this twisted tale of one very bad clown.

DEAL! “Sleaziest clown”… “that Big Top in the Sky”… “black magic clown cult”?  Hey, I can’t see that calendar too well from here! Does it say it’s Christmas morning there?  I also found a couple other features (with more HD footage, most of it hilarious) for you to watch.  First up, a sort of behind-the-scenes teaser with Ross Noble (whose work I’m not familiar with, nor have I heard of, but has a built-in cult following in the UK) who apparently worked as a street performer before he got into comedy) happily talking about the role of Stitches and how fun it was to play:

I started giggling during the footage of him barreling along riding that tricycle. Also, here’s one where he talks about the movie, starting off with his favorite kill involving a grisly version of creating balloon animals (setting it up but not spoiling the whole thing – and I’d see the movie just for the scene as described):

All the You Tube comments say Ross Noble seems pretty hammered during the interview, but I wouldn’t know, since I’m unfamiliar with his work and what he sounds like normally. Who am I to judge? He deserves it, as does the director of Stitches,  Conor McMahon, who also co-wrote the film with David O’Brien. 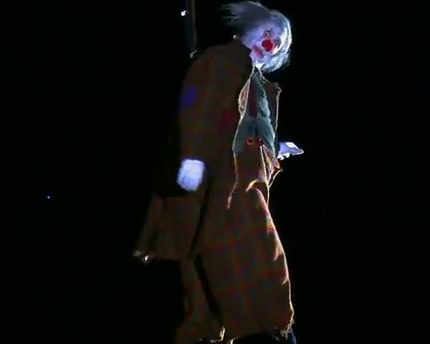 The movie debuted in May of this year at the Cannes Film Festival in France, then made a UK debut at Frightfest in August.  Stitches  opens in the UK and Ireland at the end of October. I haven’t been able to track down a US release date yet, but I’ll update you as soon as I know. According to the official Facebook page for Stitches,  tickets are now on sale for the US premiere on Halloween at Lincoln Center in NYC, but that doesn’t help out those of us not able to travel to NYC. The Facebook page also has lots of exclusive content worth checking out.  Oh, one more You Tube item: I found a link here to a UK interview with Mr. Noble that features a brief but hilarious NSFW clip of ole “Stitches” Grindle in the film’s prologue arriving at the kid’s birthday party before he meets his untimely end. (Below)

Lastly,  Mr. Noble also mentioned another kill in the movie involving an umbrella. I’m pretty sure that’s what the below frame from the trailer depicts…

*Oh yeah, I have what seems now to be my third Annual Jury Duty Summons on Monday. Since both times before were in the winter, it was easier (as every year it takes me a couple weeks longer to adjust to the longer nights and shorter days) to just stay up and write, then get ready to go down there rather than fall asleep between 4-5AM as usual then have to get up two hours later. Let’s hope I don’t get chosen, because it’s going to mess up my sleep cycle even if I get lucky and don’t get my name called Monday. I’ll still do my best not to miss a post, though.

**Speaking of Facebook, Horror Boom also now has an official Facebook page. If you have time to ‘like’ Horror Boom on Facebook (assuming you do  like Horror Boom in the first place, though you probably would have stopped reading long before now if you hated it). I’d appreciate it, since I need thirty ‘likes’ to really get creative and network more. I added a “Facebook Like Box” to our sidebar so you don’t have to bother with even going on Facebook, just click from here (also, only having only two likes showing now   just looks really sad, which is why I waited till I reached a thousand hits before I even added one)!