Well, for a little change of pace today, I thought I’d give you some fascinating insights into my work process. Let’s see, I go online, then when I’m watching something, I jot some deep thoughts down onto my sophisticated equipment consisting of a pen and a series of cheap notebooks, pretty much whatever has enough space for me to scrawl some things down. I do use some very complicated technical terms. Here’s a photo or two of my elaborate notes during the last two episodes of Season Two of The Walking Dead. 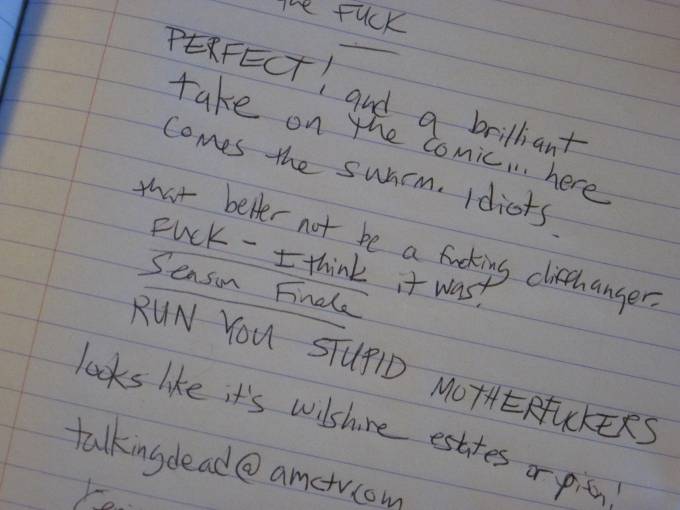 My elaborate notes taken during one of the final season 2 Walking Dead episodes (which I ended up deciding not the review on the site).

As you can see, I use a large and varied vocabulary to express myself and make sure all the nuances of the show are captured.  In case you can’t decipher my complicated lingo above, here’s another example… 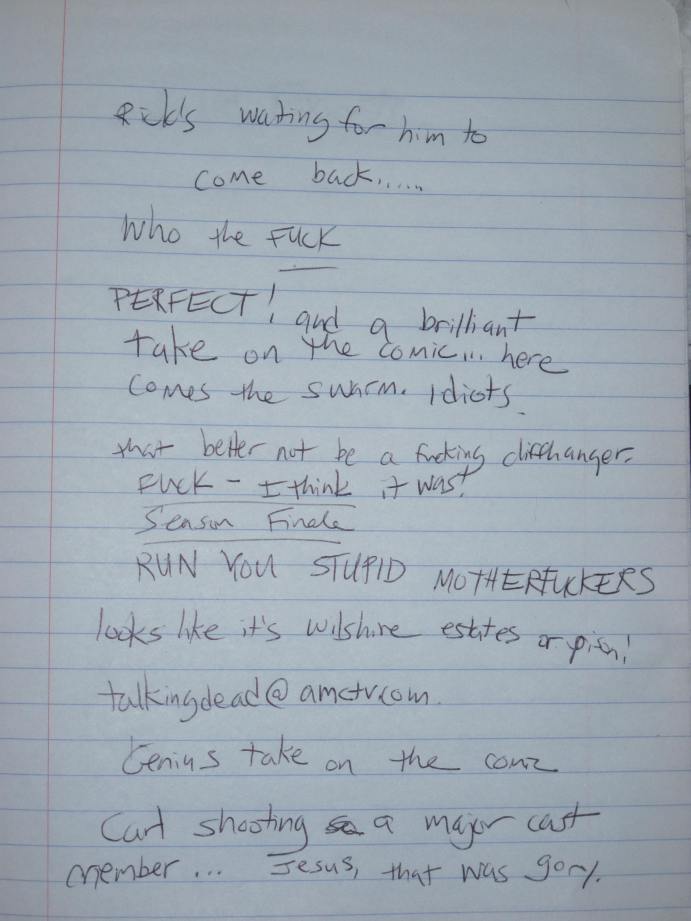 My ingenious note-taking system, wherein I take a complex, thoughtful approach to mapping out important points to highlight in my review for a Walking Dead S2 episode. I ended up not reviewing the episode I so carefully documented here.

Then I have my assistant re-transcribe– I”M JUST KIDDING. Nothing complex or fascinating ‘behind the scenes’ here at Horror Boom, really! If I had a staff, the site would actually contain breaking news and interviews multiple times, 24/7, if so.  I don’t have an assistant, unless you count one of my kittens strolling across the keyboard out of the blue. My husband gives it a fresh pair of eyes after I post a piece, if he’s not too sleepy at the time.  There’s nothing thrilling enough going on behind the scenes at Horror Boom to warrant a special alert, though if something thrilling DOES happen, like an SUV driven by Adam Green with Bruce Campbell riding shotgun containing George Romero, Stephen King, Greg Nicotero, and Samuel L. Jackson riding in it breaks down in front of our house while I’m working on/writing/researching the site, and they ring the doorbell to ask to come in and use my land line because none of their cell phones have a signal, then tell me it’d be really cool if they could hang out here 4-5 hours and in return, will let me interview them and offer to post blurbs endorsing the site and all pose for various photos with me and my husband (because in the imaginary scenario, they have nothing else better to do) watch some of my DVD/Blu-Rays and record simultaneous commentary for them exclusively, that’d be worth documenting.*  It’s more likely that a parade of polar bears riding tricycles pulls up in our driveway (although that’d be pretty interesting and good for some promotion, too), of course, but you get the idea. I try not to put stuff up that’s totally fucking boring to anyone but me, unless it’s some comic relief, as here.

Actually I vaguely recall taking these pics as a goof (I was still all hyper and geeking out after the next-to-last episode and season finale of TWD while all hell breaks loose. Lots of times I jot shit down I can’t read it myself afterwards or it’s in sentence fragments (ADD) that are really hard for me to re-create into concrete points, or my handwriting’s worse.  My husband laughed when I showed him these, so I kept them.

I have two–it maybe just one big one, but it’s definitely happening– very cool, very scary “Ways to Beat Summer Heat with Cold Chills” pieces coming up, but they were so creepy there is no way in hell I’m gathering my notes together and writing them after dark, when I have insomnia and am the only one awake in the house. Especially since one of them actually showed up in a nightmare last night. I don’t want to talk them up that much and have it by a let down, so I’ll quit with a good quote to celebrate the upcoming Blu-Ray release of Jaws. If you don’t recognize this one then you haven’t seen Jaws, and if you haven’t seen Jaws I don’t know why you’d be reading Horror Boom! It’s too bad this is waaaaay too big for a T-Shirt*. Watched the scene so many times it’s impossible to hear in my head without Robert Shaw’s voice.

Hooper: You were on the Indianapolis?
Brody: What happened?
Quint: Japanese submarine slammed two torpedoes into our side, Chief. We was comin’ back from the island of Tinian to Leyte… just delivered the bomb. The Hiroshima bomb. Eleven hundred men went into the water. Vessel went down in 12 minutes. Didn’t see the first shark for about a half an hour. Tiger. 13-footer. You know how you know that when you’re in the water, Chief? You tell by looking from the dorsal to the tail fin.What we didn’t know, was our bomb mission had been so secret, no distress signal had been sent… they didn’t even list us overdue for a week. Very first light, Chief, sharks come cruisin’, so we formed ourselves into tight groups. You know, it was kinda like old squares in the battle like you see in the calendar named “The Battle of Waterloo” and the idea was: shark comes to the nearest man… that man he starts poundin’ and hollerin’ and screamin’ and sometimes the shark will go away… but sometimes he wouldn’t go away. Sometimes that shark he looks right into ya. Right into your eyes. And, you know, the thing about a shark… he’s got lifeless eyes. Black eyes. Like a doll’s eyes. When he comes at ya, doesn’t seem to be living… until he bites ya, and those black eyes roll over white and then… ah then, you hear that terrible high-pitched screamin’. The ocean turns red, and despite all the poundin’ and the hollerin’, they all come in and they rip you to pieces. You know, by the end of that first dawn, lost a hundred men. I don’t know how many sharks, maybe a thousand. I know how many men, they averaged six an hour.
On Thursday morning, Chief, I bumped into a friend of mine, Herbie Robinson from Cleveland. Baseball player. Boatswain’s mate. I thought he was asleep. I reached over to wake him up. He bobbed up, down in the water just like a kinda top. Upended. Well, he’d been bitten in half below the waist. Noon, the fifth day, Mr. Hooper, a Lockheed Ventura saw us. He swung in low and he saw us… he was a young pilot, a lot younger than Mr. Hooper. Anyway, he saw us and he come in low and three hours later a big fat PBY comes down and starts to pick us up. Y’know, that was the time I was most frightened… waitin’ for my turn. I’ll never put on a life jacket again. So, eleven hundred men went in the water; 316 men come out and the sharks took the rest, June the 29th, 1945. (pause) Anyway, we delivered the bomb.

The Jaws Blu-Ray  will be available August 14. Also, a bigger boat-load of links for features on Jaws and The Walking Dead after the jump! **but I have a couple of versions of “We’re Gonna Need a Bigger Boat” for a design on my upcoming print-on-demand online stores (whenever I have time for that).

One thought on “Behind the Scenes at Horror Boom: Walking Dead Season Two Finale (+ Cool Links)” 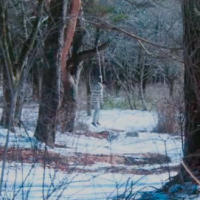 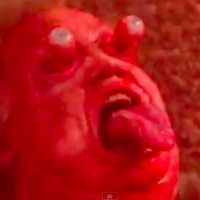 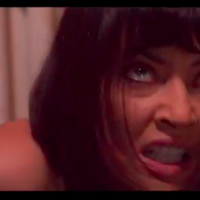 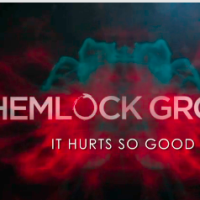